Ironman from Bhubaneswar, Odisha finished IRONMAN Canada with Broken Collar Bone from a sever accident during the cycling stage.

What a tough race with 35’C temp, high humidity and 8000 ft. of elevation gain. The 3 month preparation with 30 hours of rigorous training every week was good, and I had lot of hopes to get a good timing. Weekly train schedule was 50 Km running, 300 Km cycling and 15 km swimming. Unfortunately there was red alert for heat wave on the race day. I had to revise the expectation from 12.30 hours to 14 hours.

What a beautiful place, Whistler Canada is like the Kashmir of India or Switzerland of Europe. The most beautiful / difficult race off all in the American Continent. With the extreme heat and height gain, I was looking at many fellow racer giving up, and there were so many ambulance rescue in this race. I was talking to myself, why I am doing this race spending almost 2 lakhs of rupees on it. Am I crazy! Many of my athlete friends with whom I trained with, could not finish the race, they gave up because of cramps.

The race started at 7 AM. In the swim I made a blunder, as I had followed the 1/2 IRONMAN athletes, the other race going on that same day. Because of the wrong turn I had to swim 300m extra. I was worried, but thank GOD, I still made it before cut-off time. As the cycling progressed, I started having cramps around 110 km, into the race. My thighs were getting locked. I slowed down, and focused on reaching the 180 mark slow and steady. After 6.30 hours of cycling I reach the 170km mark. I became ambitious, and increased my speed for last 10 km. On one of the down slope, I was going more than 50 km/h on my cycle. Unfortunately at 173 km I lost balance, and had a sever crash. My right shoulder was swollen like a balloon and frozen. My helmet saved my head. There was bruises everywhere. Got severe cramps on legs because of the heavy impact. The race officials were asking me to go to hospital. I asked them to give me ice pack. It helped and I fixed my cycle, and cycled to the finish of the 180 km mark.

I went to changing room for run, had 20 salt capsules to stabilize the cramps on both legs. I put more ice on the shoulder, I got the hint it was broken in many places. But it never came to me to give up. I asked a fellow runner how to fight the sever crams, as salt is not helping. She told me to drink Pepsi. I gave up soft drinks 15 years for now. But it did helped once I started drinking Pepsi, the crams were not as sever as they were. Instead of dragging or walking, I was able to jog. I was chanting the name of goddess ‘JAI MATA DI’ all the way. Finished the race in 15 h 48m. What a memorable day it was. Now I am a officially an “IRONMAN CANADA”. After coming back home, went to hospital, and had to under go surgery to fix the broken bones. Hope to be back in shape for my next race in Lousiville, Kentuckey, USA in Oct 2018.

This race does prove, how you can talk to your mind to do the impossible. 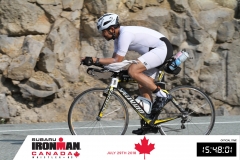 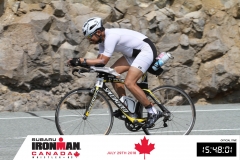